De Rust might be small but it is charming and has become something of haven for artists and is famous for its dessert wines and cheeses. The streets are treelined and host to a number of wonderful examples of late 19th century architectures. De Rust is known for the meandering pass that serves as a gateway that connects the Klein Karoo and the Great Karoo through a gorge with a 25km road crossing the same river 25 times.

Beautiful picnic spots can be found in Meiringspoort which has become one of the most visited spots in the Klein Karoo. The Meiringspoort Waterfall drops 60m into a deep pool.

It is a small village with a total population of 3566 at the last count in 2011, 93% of whom speak Afrikaans, but English is also widely spoken.

De Rust was established in 1900 on a portion of Meirings Farm. The name of this town literally means The Rest and is an indication of how it came about. 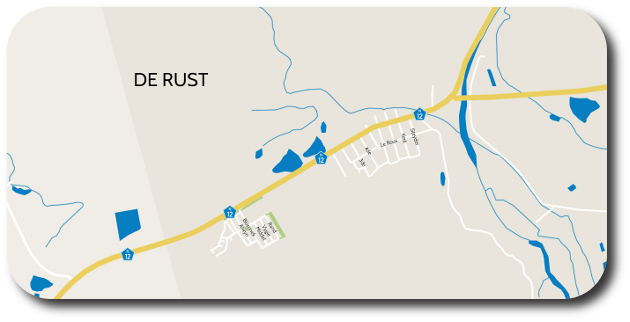 ( Click to see a larger version of this map )